Book a table using our Online Booking Form. If you are experiencing any difficulties please do not hesitate to contact us on 01386 853555 or info@russellsofbroadway.co.uk

PLEASE NOTE – WE DO NOT TAKE RESERVATIONS FOR ANY OUTSIDE TABLES, THEY ARE ON A FIRST COME FIRST SERVE POLICY.

We do accept well behaved dogs on the tables in the bar area only, if you are planning on bringing your dog please let us know in advance so we can check availability.

RESERVE A TABLE AT RUSSELLS

Alternatively visit our sister take-away, Russells Fish and Chips where no booking is necessary.

STAYING AT RUSSELL’S OF BROADWAY ACCOMMODATION

Accommodation is available on a B&B basis 7 days a week.

If you wish to cancel a booking, we require 7 days notice prior to arrival. If we are unable to re-sell the room if cancelled within this time the first nights accommodation tariff will apply.
VIEW OUR ROOMS

The centerpiece of the idyllic Cotswolds village of Broadway, Russell’s is one of the most relaxing places to eat and stay in the UK. Owned and run by the same family headed by Andrew Riley, this award-winning Cotswolds restaurant and hotel, the former showroom of Sir Gordon Russell’s furniture, is the perfect place to visit and enjoy the glorious English countryside.

Russell’s is housed in, and takes its name from the old workshop of the influential 20th Century British furniture designer, Sir Gordon Russell. Russell, who moved to Broadway with his father in 1904, spearheaded the government’s utility furniture scheme during World War II, opening a workshop in the current Russell’s building in 1923. Greatly influenced by the Arts & Crafts movement, he employed 200 highly skilled craftsmen in his firm over the next 60 years.

Check in now to experience this Cotswolds hotel’s delicious modern British food with seven guestrooms and suites all set in laid-back, stylish surroundings.

A RESTAURANT WITH ROOMS.

Russell’s opened in 2004, following a painstaking restoration, which transformed this historic building into an elegant and contemporary ‘restaurant with rooms’. A modern, airy restaurant with terrace and private dining room are located on the ground floor, with seven individually designed bedrooms within the same building.

Head Chef, George Santos serves modern British food in the award-winning restaurant, with local Vale of Evesham and Cotswold produce featuring throughout the daily-changing menus. The modern, airy dining room is open for breakfast, lunch and dinner, with friendly staff and laid-back service combining to create a relaxed and warm setting, day and night.

George became our Head Chef in November 2017, and brought a wealth of experience and inspired ideas. His new menu includes some great dishes including Cornish Scallops, Various Parsnips, Lemon Balm and Fillet of 28 Day Dry Aged Scotch Beef, Chateau Potatoes, Carrots, Parsnips & Juniper Sauce. We continue to offer our great value fixed price lunch and a Roast lunch on Sundays. Samples of all of our menus can be seen below:

Both new and old world wines are well represented on the Russell’s wine list, combining to create an interesting selection for you to choose from. Included on the list are a dozen house wines, which are available by the glass or the bottle. The list is constantly changing and we are always on the lookout for good quality wines – if you have any recommendations, please let us know.

If you would like to view our current Wine Lists then please click on the image below and a PDF will start downloading showing you the current list at Russell’s of Broadway. All wines Subject to availability.

Signup to receive our newsletter of offers and events.

HOW TO FIND US 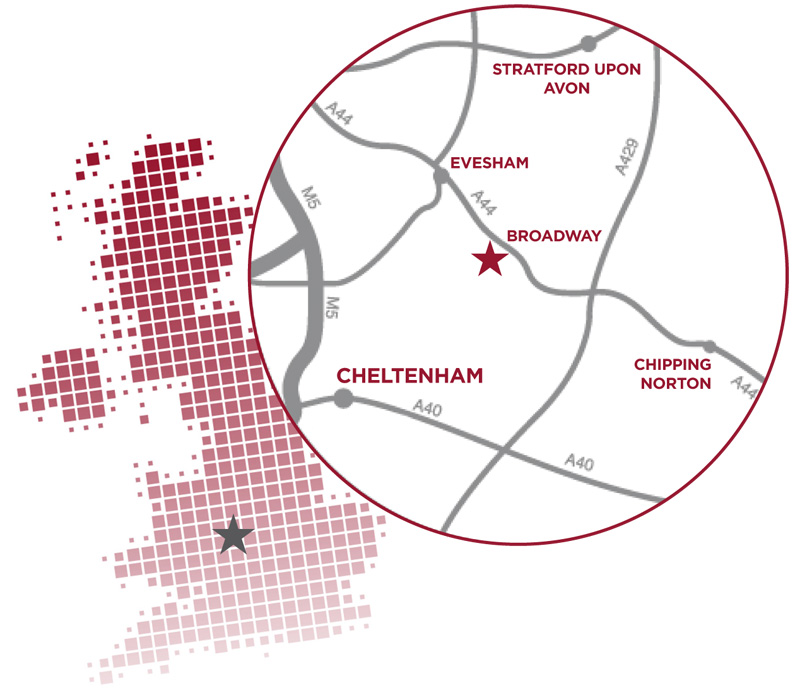 HOW TO FIND US

By road from the south-east:

Leave the M40 at Junction 8 and follow the A40 towards Oxford. Then follow the A44 leaving Oxford in the direction of Evesham. At Moreton-in-Marsh, continue on the A44 to Broadway.

By road from the north:

Leave the M5 at Junction 9 and take the A46 east towards Evesham. Follow for about 11 miles then take a right onto the A44, signposted for Oxford. Follow for about 4 miles and follow the directions to the centre of Broadway.